This Thursday in Stuart, Senate President Joe Negron is holding a town meeting on the most important legislation to emerge from 2017; a massive new reservoir on public lands south of sugar fields to stop the toxic runoff from Lake Okeechobee and to re-hydrate the Everglades and Florida Bay with clean, fresh water. 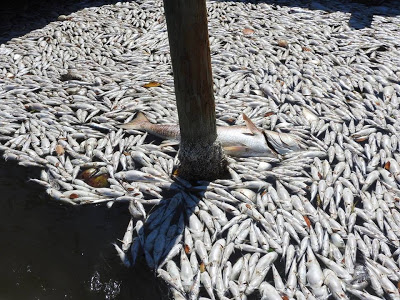 Senate President Joe Negron responded to voters in his district and across the state, where toxic pollution from Lake Okeechobee is wrecking property values, quality of life and economic opportunities

The 2017 legislation was approved by the legislature after Florida’s coastal areas were devastated by toxic algae blooms in the winter of 2015/2016. Water managers were forced to dump billions of gallons of toxic water from Lake Okechobee. It couldn’t be shunted onto sugar lands, and so managers released a toxic tsunami into waterways and badly fouled both Florida coasts.

The water management infrastructure in South Florida is controlled by the state and the US government through the Jacksonville District of the US Army Corps of Engineers. Florida Gov. Rick Scott directs policies and implementation through his appointees to the governing board of the South Florida Water Management District.

The political strings that tie Scott are pulled by the wealthiest and most powerful agribusiness producers in the United States.

Big Sugar fought Negron’s 2017 legislation, but a big part of the fight — deploying more lobbyists than state senators —  was crocodile tears. Big Sugar knows how hard it is to protect downstream local businesses on both Florida coasts, property values, rivers and estuaries and to get more clean, fresh water into the Everglades and Florida Bay without harming the resources of the Miccosukee Tribe of Indians in the process. It knows because its business is to get what it wants. In the end Big Sugar got what it wanted through Gov. Rick Scott and the legislature — a law favorable to its terms –and more.

The state legislature inserted poison pills: a prohibition against eminent domain in the EAA, a requirement that the state negotiate for land swaps only with “willing sellers”, and a provision that allows taxpayer moneys to fund the future privatization of Florida’s water supply, anticipating the day when big landowners will be allowed by the state to sell rainwater for their own profit. If there was hope, it lay in only one place: that the District could consider a larger footprint and additional lands to secure the required water quality standard.

Environmentalists praised Senator Negron’s initiative but settled in for the long haul, knowing that the law stipulated the District had to report its recommended action to the legislature by January 9th, 2018.

That deadline is fast approaching, hence the town meeting where Senator Negron will listen to the public’s rising concern about what the District proposes, including protesters who will be bused into Stuart from the farm communities.

In December, under an accelerated, vacation-heavy time line, the District released a suite of proposals that met with immediate objection by environmentalists. While the District provided data in support of its proposals, they ignored feedback they had made serious errors; artificially inflating the efficiency of water quality modeling.

Environmentalists feared from the start that proposed solutions failed to take into account a footprint adequate for treatment and cleansing marshes to complement the reservoir. They relied on the District following the provision in the new law to explore options for an expanded footprint.

In mid-December Treasure Coast Palm wrote, “Florida Senate President Joe Negron wants state engineers to think outside the box and outside the “footprint” they’re considering for a reservoir south of Lake Okeechobee In particular, Negron wants the South Florida Water Management District to “consider using any additional land available (for the reservoir), if necessary.”

Initially, a grander version pitched by environmentalists envisioned 60,000 acres. It included a portion of sugar fields long blamed for pollution and jump-started construction on a sprawling shallow reservoir south of the lake intended to clean water before it reached Everglades National Park — a project approved in a landmark Everglades restoration plan in 2000. The massive footprint allowed plenty of shallow storage to clean the water, a strict requirement hammered out through years of litigation that forced the state to stop polluting the Everglades. What landed on the drafting table of South Florida water managers was subsantially different.

Schorsch calls the outstanding issues over the 2017 Everglades legislation, a “food fight”. Environmentalists don’t know when to say “stop” and scorns the political ineffectiveness of environmentalists.

Environmentalists don’t need reminding. What they need is a level playing field. Big Sugar extracts its political money through the US Farm Bill, costing US consumers twice the world price of sugar and spinning hundreds of millions a year into Big Sugar’s pockets. The industry liberally sprinkles a portion of that money through the political ranks.

The public fears, rightly so based on at least one of the proposals, that the District plan is another step by Big Sugar to commandeer Florida water resources.

That would be a bitter pill for Senator Negron’s constituents and Florida taxpayers.

The “grand compromise” Senate Bill 10 was never meant to “settl(e) the issue once and for all” (Schorsch’s words) because federal court judgements on water quality in the Everglades are the backstop to legislative trickery on the Everglades.

Whatever progress has been made in Florida on behalf of environmental protection has been through federal courts, particularly in Everglades restoration where stinging judgments against Florida and Big Sugar, for allowing water quality to be trashed, remain the only bullwark against a tide of toxic political money.

Yes Big Sugar can buy election outcomes, but it hasn’t cracked the code to the federal judiciary.

It was, after all, the 2003 attempted heist of Everglades water quality law by Big Sugar and then Gov. Jeb Bush relating to standards, metrics and measurements that triggered nearly a decade of litigation by the Miccosukee Tribe and a small Miami environmental group, Friends of the Everglades, founded by Marjory Stoneman Douglas. That litigation resulted in a declaration of victory by Gov. Rick Scott who pledged $880 million in taxpayer money to fix his allies’ pollution. Environmentalists mostly agreed that the Scott Restoration Strategies could meet stringent water quality goals. Today, they claim the state is reversing course with an ill-conceived plan that will unravel every gain to date.

It has always been the case that “fixing once and for all” the discharges from Lake Okeechobee, so flthy water doesn’t puke on downstream communities on both Florida coasts, would have to pass the test of federal court judgments based on sound science.

If Big Sugar gets its way, there is going to be a mini-Lake Okeechobee built with walls thirty to forty feet high for a deep reservoir with the same stagnant water as Lake Okeechobee. An alternative plan does exist — provided by highly competent scientists of the Everglades Foundation — but the District has refused to consider an option based on more land, whether or not the land is in public ownership.

Schorsch accuses environmentalists of “moving the goal posts”. It is a kind of drive-by shooting that glides by the fact Big Sugar’s key players are engaged in the ultimate act of moving of goal posts: reverse the federal court decisions protecting the Everglades.

States rights is a potent theme in the nation’s capitol. Count on Gov. Rick Scott to raise the issue with President Trump during private meetings: “We need to end the administrative state and rein in the bad federal judiciary, which is holding back ‘jobs’.” In the case of Big Sugar, those jobs will be embedded in massive industrial and suburban development it is planning planned in the Everglades Agricultural Area only a few miles west of Mar-a-Lago — if they can confuse the science, manipulate fact, and knee-cap federal water quality regulations protecting the Everglades.

Big Sugar wants the federal judgments gone. They are working it, because they know so long as the judgments stand, it is going to be impossible to re-write the science.

That’s not a “food fight”: it is a fundamental attack on the system of checks and balances essential to our democracy.

The only hope of mitigating disastrous, toxic pollution coursing out of the lake is a plan that includes a treatment area footprint adequate to the purpose of storing, first, billions of excess water during flood season, and gradually cleansing through a landscape of filtering marshes.

Contrary to agitators set to the task by Big Sugar, that does not require upheaval of communities in the Everglades Agricultural Area.

No one is talking about sacrificing jobs. It is a matter of using available land already owned by the public and swaps with Big Sugar billionaires to achieve critical purposes; protecting all downstream communities, the Everglades and Florida Bay.

“These environmental groups refused to be satisfied,” Schorsch writes and scolds environmental groups for “showing a great deal of ingratitude”, a Trumpian theme and half-step from “let them eat cake”. With Trump and Scott, it is too often the case that to know the truth of a matter, flip what they are saying inside-out.

Eventually voters will express their disgust at the ballot box. Whether property values, water and taxes are forever lost as sacrifice zones for Big Sugar depends on Senator Negron and the Florida legislature.

This is our last chance.